Greece’s National Cheese, feta, is one of many greek cheeses of Protected Designation of Origin, which means it may be produced only in Greece and only in certain specific regions.

Feta by law is produced from either 100% sheep’s milk or a combination of sheep’s and goat’s milk. It may range in flavor and texture from mild and creamy to sharp and hard, depending on production methods, regional distinctions, and season.

It pairs well with tomatoes, peppers, aubergines, and squashes, among other foods.

Epiros feta cheese is produced by a combination of sheep and goat milk and represents the traditional, authentic, Greek feta which is distinguished for its typical discrete taste. As the name Epiros states, it is made of milk that derives from animals of the particular geographical area, a region that is widely known for its pure, clean environment. The top quality of raw materials used combined with the high standards of the company’s facilities resulted to the acquisition of many prestigious awards in local and international culinary competitions. 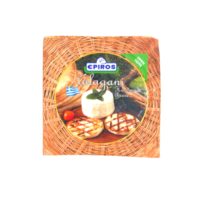