The properties of the flowers of Matricaria chamomilla or German chamomile, were well documented in the medicinal writings of the Ancient Egyptians, in those of the Greek father of medicine Hippocrates and those of the Roman physician Galen.

So what benefits does chamomile tea offer? Why is chamomile tea one of the world’s most popular teas, with an estimated consumption of over a million cups drunk worldwide each day?

Perhaps one of the best known, is to relax nervous tension and help with insomnia. Taken 2 hours before bed, the flowers contain a flavonoid called apigenin which is thought to induce sleepiness by binding to GABA receptors in the brain. Apigenin has other significant properties apart from being a powerful antioxidant, it has both anti-inflammatory and anti-carcinogenic properties.

Dry chamomile flowers contain over 120 natural defence compounds such as flavonoids and terpenoids which contribute to its medicinal properties. These contribute to the anti-inflammatory and soothing effect it has on the gastrointestinal tract and are beneficial in Gastroesophageal reflux disease (GERD).

Chamomile also helps decrease gastric secretions, reducing the risk of  stomach ulcers. Herbal medicines have an advantage in that although they work slowly, they have minimal toxic side effects.

The raw, organic, mono-floral honey made by bees sited in Murcian lavender fields, brings a wealth of beneficial solar properties. Calming in nature, these properties are naturally imparted to the honey and help relieve anxiety and lift depression. The combination of the sweetness of lavender honey with the floral, apple-like notes of the German chamomile flowers have an immediate soothing effect.

(This is to ensure that the raw honey is not stripped of its beneficial properties.) 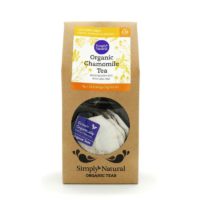